The rocking treadle beneath Grandmother Irene’s sewing machine was a fascinating place for a young granddaughter, perhaps especially because I knew she did not want me to sit or play on it.  It was always cool, even in those July days before air conditioning came to ordinary homes in the South.  Once upon a time, Grandmother had powered the machine with her feet, a belt (without a buckle!) running between the treadle and the big wheel on one side of the sewing machine, making the machine go, but before I started kindergarten, Grandmother had electricity added to the machine.  She still liked to rest her feet on the treadle while she sewed, the glossy black treadle was just an attractive nod to the past.  If we wanted to update our sewing skills today we would go to Walmart or Costco, or better yet, a specialty sewing machine boutique and buy a new machine.  Grandmother probably called her favorite sewing and vacuum repairman, told him what she wanted and said, “Fix it, please.  I’ll need it back soon.”

Mollie Irene Smith Ballew was born in 1889 on a large farm in south Georgia.  Her five brothers were either doctors or lawyers, all dying young, as did her husband.  Her much younger half-sister, Roberta, lived in Huntsville, AL, which seemed very far away at the time.  She lived the life of a Baptist minister’s wife in small towns, moving every few years as her husband, my grandfather, “got called” to another church.  One of those towns was Plains, GA–I enjoyed driving by that church in pouring rain last year.  When my dad, the middle son, was 15, my grandfather fell from a fruit tree and died shortly after, leaving grandmother Irene with three boys to raise, during a time when women “didn’t work.”

Yet Grandmother Irene did work hard, always maintained her excellent posture, raised her three boys, and got things done.  I never heard that she took in sewing to make ends meet, but I suspect she did, excellent seamstress that she was.  One of her positions was as a housemother at GA Southwestern College (Americus).  I believe she also worked as a practical nurse–with three boys, I’m sure she had a lot of practice!  She did what had to be done,  properly, without making much fuss about it, and always with good manners.

When Grandmother Irene retired, sometime in the 1950’s, she came to live with my family in Marietta.  She stayed busy in the D. A. R., joined the Baptist church and made friends, sewed the majority of her own clothes, some for Mama and Janice and many of mine.  My sister Janice, who is a whiz at sewing and quilting,  learned to sew in Home Ec. classes, but  said she observed Grandmother adjusting patterns for fit, and cutting them out. She always went to Grandmother for help, as our mother was a perfectionist, and would make us rip seams out and start over.  (I did remember that!)  Janice told a funny story about Mama and Grandmother Irene working together to make Janice a party dress on the day of the party!  Speedy Grandmother Irene sewed on her machine…they finished hand-hemming the full skirt minutes before Janice was picked up for the party!

I think Grandmother helped out with my youngest (older) brother James (then called Jimmy) and our cousin John while our moms worked.  Our NC cousins visited more often, with Grandmother here.  My cousin Becky told me Grandmother Irene acted like her grandmother too, picking her up at school when she was sick, and coming to her house, even though they weren’t actually related.  Then I came along, a surprise baby when the others were pre-teens or in high school.

Mama was a third grade teacher, so when she headed back to school in the Fall, Grandmother Irene cared for the new baby.  I’ve heard Grandmother carried me around in a basket, set on the floor of her ’50 Ford with dull blue paint. (Janice told me it was black and she’s probably right, but I remember asking Mama why the paint was so odd. “It’s just so old, honey!”)  As I became older, I remember going with her to the Colonial Grocery, to see her friends Mrs. Redd and Mrs. Cain (who had a circus playset stored under her sofa!) and occasionally, the public playground. But some of our favorite times were at home, reading together in her enormous rocking chair, writing letters together (she wrote, I pretended), playing with dolls while she sewed on her machine, making dresses for herself, a few for Janice and Mama, most of my clothes, and best of all, doll clothes from the scraps!  As I started school, she made her first baby quilts for her great-grandchildren, a few with scraps I could match to Mama and Janice’s dresses.  She sewed my flower girl dress when Janice got married, so I could match the grown-up bridesmaids.  (My girls both enjoyed playing dress-up in that dress!)

One day when I was 4 or so, I decided I wanted to sew too.  Grandmother was in the kitchen making a pound cake, which wasn’t very interesting, as Grandmother did not approve of little children licking beaters.  (If Grandmother had been making her chicken and dumplings, I would have been right there at her elbow.)  I went to Grandmother’s scrap bag, found a small navy bit, folded twice like a hankie, got Grandmother’s scissors, and cut out a circle.  Then I went to Grandmother with a thread, needle and a needle threader, and asked her to thread the needle for me.  She did.  (I’m sure she was curious, but I don’t remember her asking why.  Perhaps I had the scrap with me.)  I remember sitting at a table, matching cloth edges up, stitching and saying “Grandma, I can sew!”   Soon after this, grandmother taught me to chain stitch and single crochet, and children’s embroidery kits were a part of my days with Grandmother, and as soon as I was old enough (eleven), Mama enrolled me in a Singer Teen Class.

When I inherited Grandmother’s sewing machine, I went through the carved wooden drawers, cleaning out dried up oil cans, unknown bits and screws that lost their home a long time ago.  But in the back of a drawer, I found a navy blue scrap of cotton, with an uneven circle cut out.  It was sewn back into place with large stitches of royal blue thread.  A grace note from Grandmother Irene.

Thank you to Janice Ballew Lemonds, for answering questions and telling a fun story.
Love you, Sis! 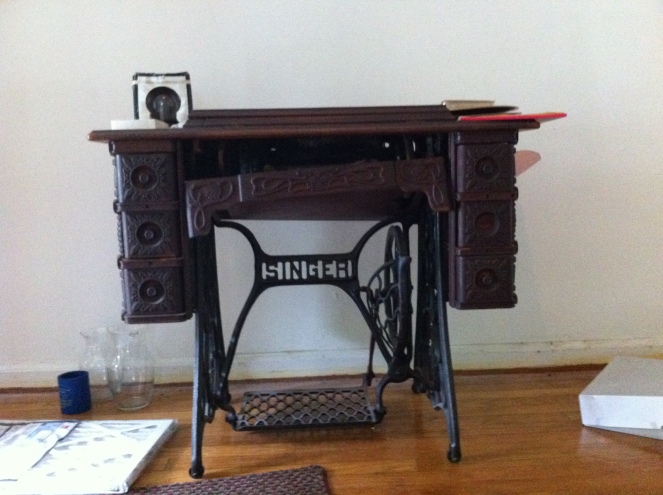